Go through the NEW REGULATIONS, established as a consequence of COVID-19.

Auzoko hitzak (Words from the neighbourhood) is an educational project whose principal axes are basque language, public space (neighbourhood) and cultural production, and is being developed in collaboration with some schools located in Egia: Aitor Ikastola, Maria Reina Eskola and Mundaiz Ikastetxea.

Euskera (basque language), because Auzoko Hitzak is part of the project Basque Multilungual Stuidents (pilot project in Egia and Dima); neighbourhood, because we take care of the relationship between pedagogy and public space, reinforcing the idea of educational community; and cultural production, because we are convinced that in educational processes there is also producing culture.

Elementary school pupils are the key driver of the project and in consequence, the firs reflection will arise from their own interests, around subjects like the use that they do of the spaces in the neigbourhood, linked to what we say and hear in them.

From October to March we have worked in collaboration with 9 groups of elementary school pupils and differents agents, some of them commercial, from the neighborhood. In 8 working sessions we identified places to make interventions and reflect on different ways to use them giving more presence to Basque language. Each group chose a place to make an intervention and produced an artefact to leave it in the public (or commercial) space.

This exhibition is aimed to show the processes and materials that have been produced (interventions, videoletters, audios, drawings, photos...). All the groups that have participated in the project will come to the exhibition during the week to show their projects and share experiences and learnings.

A program of activities such as workshops, screenings and lectures will be also organised to continue the research on collaborative education processes. 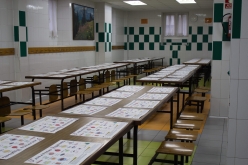 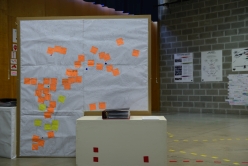 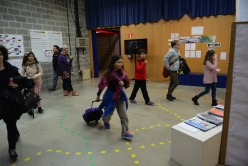 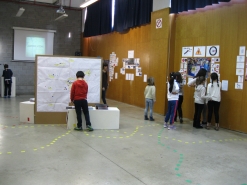 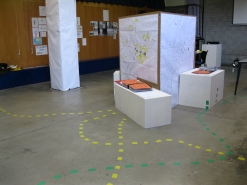 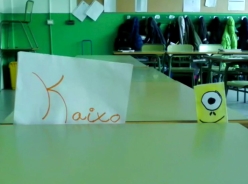